One of the many tragic stories of the Great Recession involves Jefferson County, Alabama. As Matt Taibbi explained in an article in Rolling Stone last year, mega bank JP Morgan Chase used a predatory refinancing deal on sewer bonds to reap billions while the local area was financially devastated.

Now, Jefferson County, still reeling from the effects of JP Morgans dirty deals, is moving to place nearly 1,000 public workers on administrative leave without pay, as the state Legislature failed last week to come to the municipalitys aid with any fiscal support. In doing so, the county hopes to save just over $12 million.

Yet while the public workers of Jefferson County will soon face the prospect of losing their wages and livelihoods through no fault of their own, JP Morgan Chase continues to rake in lavish profits. In 2010, the mega bank posted a profit of a whopping $17.4 billion; during this past quarter, the bank reported the biggest quarterly profit in its history, with a 67 percent rise in net income.

ThinkProgress has assembled the following graph laying out the banks net income in the first quarter of 2011 $5.6 billion next to the paltry $12 million Jefferson County cannot find to pay nearly a thousand of its hard-working public employees: 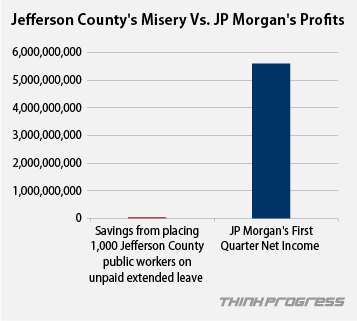 The savings that Jefferson County hopes to get from placing the thousand employees on unpaid extended leave amount to approximately 0.2 percent of JP Morgan Chases 2011 first quarter profits. Speaking of placing public employees on extended leave, County Commissioner David Carrington said, Its disappointing for citizens in light of the services that will be lost. Of course for [the families of the affected public workers], its going to be a lot more personal than that. Ironically, Rep. Spencher Bachus (R-AL), who currently chairs the House Financial Services Committee, represents Jefferson County in Congress and is trying to slow down the regulation of derivates like those that decimated his constituents community.