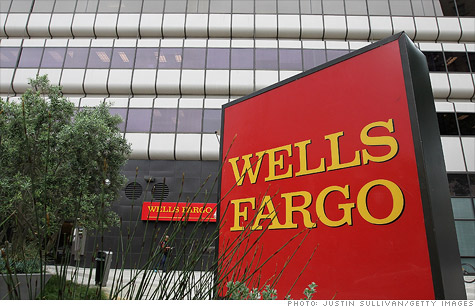 The Fed accused the nation’s fourth largest bank by assets of steering potential borrowers who could have qualified for prime rates into more expensive subprime loans.

The authorities also claimed that employees of Wells Fargo Financial, a non-bank subsidiary closed last year, doctored income information on mortgage applications to push through borrowers that would not have qualified for based on income.

The fine is the largest the Fed has ever issued under its consumer-protection authority and is the first action taken against a bank for predatory lending practices related to the housing bubble.

FTC: Countrywide borrowers to get $108 million in refunds

The Fed also ordered Wells Fargo to compensate borrowers who were affected by the alleged activities.

Wells Fargo (WFC, Fortune 500) agreed to pay the fine without admitting any wrongdoing.

The Fed blamed compensation and sales quota policies at Wells Fargo Financial for encouraging employees to falsify documents. It also faulted the bank for having inadequate controls in place to manage risks.

In a statement, Wells Fargo said the allegations stem from a few former employees and pledged to increase oversight of its lending practices.

“The alleged actions committed by a relatively small group of team members are not what we stand for at Wells Fargo,” said chief executive John Stumpf. “Fair and responsible lending practices have been at the core of our culture, and they will continue to guide us as we work closely with the Federal Reserve to provide restitution to customers who may have been harmed.”

The loans in question were primarily made to home owners looking to refinance existing mortgages and often involved additional cash payments, according to the Fed.

Under the Fed’s order, Wells Fargo is required to review subprime loans made between January 2006 and June 2008. In cases where borrowers were pushed into loans or had their income information altered, the bank is required to make restitution.

Wells Fargo said it has already compensated 600 customers as part of an internal investigation.

Wells Fargo expects that less than 4% of the 300,000 loans it originated over the last four and a half years will be eligible for compensation. The payments have already been factored into reserves, according to Wells Fargo.

On Tuesday, Wells Fargo reported record net income of $3.9 billion for the second quarter on more than $20 billion in revenue.