Its hardly news that the near meltdown of Americas financial system enriched a few at the expense of the rest of us. Whos responsible? The recent report of the Financial Crisis Inquiry Commission blamed all the usual suspects Wall Street banks, financial regulators, the mortgage giants Fannie Mae and Freddie Mac, and subprime lenders which is tantamount to blaming no one. Reckless Endangerment concentrates on particular individuals who played key roles. 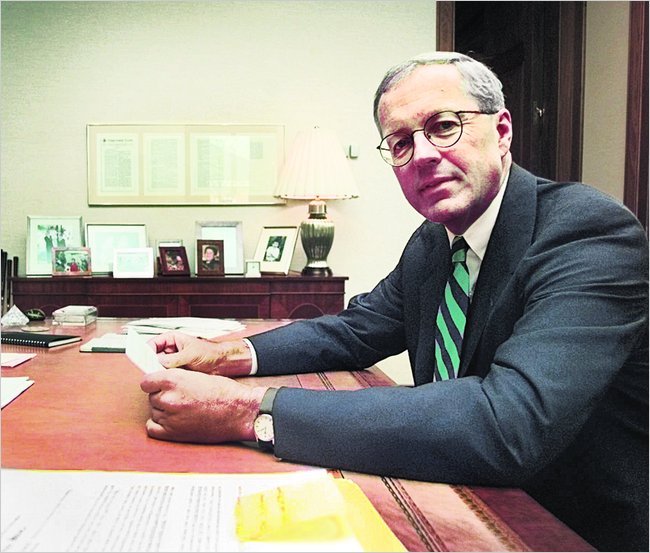 The authors, Gretchen Morgenson, a Pulitzer Prize-winning business reporter and columnist at The New York Times, and Joshua Rosner, an expert on housing finance, deftly trace the beginnings of the collapse to the mid-1990s, when the Clinton administration called for a partnership between the private sector and Fannie and Freddie to encourage home buying. The mortgage agencies government backing was, in effect, a valuable subsidy, which was used by Fannies C.E.O., James A. Johnson, to increase home ownership while enriching himself and other executives. A 1996 study by the Congressional Budget Office found that Fannie pocketed about a third of the subsidy rather than passing it on to homeowners. Over his nine years heading Fannie, Johnson personally took home roughly $100 million. His successor, Franklin D. Raines, was treated no less lavishly.

To entrench Fannies privileged position, Morgenson and Rosner write, Johnson and Raines channeled some of the profits to members of Congress contributing to campaigns and handing out patronage positions to relatives and former staff members. Fannie paid academics to do research showing the benefits of its activities and playing down the risks, and shrewdly organized bankers, real estate brokers and housing advocacy groups to lobby on its behalf. Essentially, taxpayers were unknowingly handing Fannie billions of dollars a year to finance a campaign of self-promotion and self-Â­protection. Morgenson and Rosner offer telling details, as when they describe how Lawrence Summers, then a deputy Treasury secretary, buried a department report recommending that Fannie and Freddie be privatized. A few years later, according to Morgenson and Rosner, Fannie hired Kenneth Starr, the former solicitor general and Whitewater investigator, who intimidated a member of Congress who had the temerity to ask how much the company was paying its top executives.

All this gave Fannies executives free rein to underwrite far more loans, further enriching themselves and their shareholders, but at increasing risk to taxpayers as lending standards declined. A company called Countrywide Financial became Fannies single largest provider of home loans and the nations largest mortgage lender. Countrywide abandoned standards altogether, even doctoring loans to make applicants look creditworthy, while generating a fortune for its co-founder, Angelo R. Mozilo. Meanwhile, Wall Street banks received fat fees underwriting securities issued by Fannie and Freddie, and even more money providing lenders like Countrywide with lines of credit to expand their risky lending and then bundling the mortgages into securities they peddled to their clients. The Street, Morgenson and Rosner say, knew lending standards were declining but maintained the charade because it was so profitable. Goldman Sachs even used its own money to bet against the bundles making huge profits off the losses of its clients on the very securities it had marketed to them. Eventually, of course, everything came crashing down.

The authors are at their best demonstrating how the revolving door between Wall Street and Washington facilitated the charade. As Treasury secretary, Robert Rubin, formerly the head of Goldman Sachs, pushed for repeal of the Â­Depression-era Glass-Steagall Act that had separated commercial from investment banking a move that Sanford Weill, the chief executive of Travelers Group had long sought so that Travelers could merge with Â­Citibank. After leaving the Treasury, Rubin became Citigroups vice chairman, and over the following decade pocketed more than $100,000,000 as the bank sank deeper and deeper into a risky morass of its own design. With Rubins protÃ©gÃ© Timothy F. Geithner as its head, the New York Federal Reserve Bank reduced its oversight of Wall Street.

A tight web of personal relationships connected Fannie, Goldman Sachs, Citigroup, the New York Fed, the Federal Reserve and the Treasury. In 1996, Fannie added Stephen Friedman, the former chairman of Goldman Sachs, to its board. In 1999, Johnson joined Goldmans board. That same year Henry M. Paulson Jr. became the head of Goldman and was in charge when the firm created many of its most disastrous securities while Geithners New York Fed looked the other way. As the Treasury secretary under George W. Bush, Paulson would oversee the taxpayer bailout of Fannie Mae, Freddie Mac, Goldman, Citigroup, other banks and the giant insurer American International Group (A.I.G), on which Goldman had relied. As head of the New York Fed, and then as the Treasury secretary, Geithner would also oversee the bailout.

Morgenson and Rosner are irked that their key players got away with it. American taxpayers have so far shelled out $153 billion to keep Fannie and Freddie afloat and are still owed tens of billions from bailing out other financial institutions. Yet today James Johnson is a rich and respected member of Washingtons political establishment (although he was forced to resign from President-elect Obamas advisory team after the press got wind of his cut-rate personal loans from Countrywide). Franklin Raines retired from Fannie with a generous bonus. Henry Paulson became a fellow at Johns Hopkins. Robert Rubin is affiliated with the Brookings Institution. Timothy Geithner remains Treasury secretary.

The failure to hold central figures accountable for their actions sets a dangerous precedent, the authors say. A system where perpetrators of such a crime are allowed to slip quietly from the scene is just plain wrong. True up to a point but Morgenson and Rosner dont show that any actual crimes were committed. Their major characters surely exhibited outsize ambition and greed, but these qualities are not exactly rare in modern capitalism. Curiously absent from their book are some other prominent people who have been suspected of perpetrating fraud, like Richard S. Fuld Jr., who ran Lehman Brothers into the ground, and Joseph J. Cassano, the former head of the financial products unit at A.I.G.

The real problem, which the authors only hint at, is that Washington and the financial sector have become so tightly intertwined that public accountability has all but vanished. The revolving door described in Reckless Endangerment is but one symptom. The extraordinary wealth of Americas financial class also elicits boundless cooperation from politicians who depend on it for campaign contributions and from a fawning business press, as well as a stream of honors from universities, prestigious charities and think tanks eager to reward their generosity. In this symbiotic world, conflicts of interest are easily hidden, appearances of conflicts taken for granted and abuses of public trust for personal gain readily dismissed.

All told, the nation appears to have learned remarkably little from the near meltdown. Fannie and Freddie, now wards of the state, currently back more than half of all new mortgages, and their executives are still pocketing fortunes. Wall Streets biggest banks are a fifth larger than they were when they got into trouble, and the pay packages of their top guns as generous. Although the rest of America has paid dearly, we seem more recklessly endangered than ever. h

Robert B. Reichs latest book is Aftershock: The Next Economy and Americas Future.