WASHINGTON More than 1.5 million older Americans have lost their homes, and millions more are at risk as the national housing crisis takes its toll on those who are among the least able to weather the storm, an AARP report says. 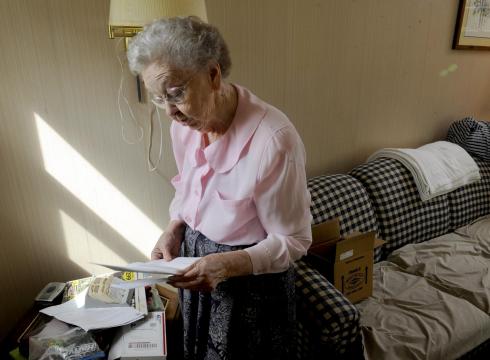 Even working two jobs hasn’t been enough to allow Jewel Lewis-Hall, 57, to make her monthly mortgage payments on time. Her husband has made little money since being laid off from his job at a farmer’s market, and Lewis-Hall said her salary as a school cook falls short of what she needs to make the payments on her home in Washington.

Lewis-Hall and her husband have been making payments late for about a year, but panic didn’t set in until recently, when the word “foreclosure” showed up in a letter from the bank.

“You’re used to living a certain way, but one thing leads to another,” Lewis-Hall said. “It’s not like I have a new car or anything. I’m driving one from 1991.”

About 625,000 in the same age group are at least three months behind on their mortgages.

About 3.5 million 16% of older homeowners are underwater, meaning their home values have gone down and they now owe more than their homes are worth.

AARP said over the past five years, the proportion of loans held by older Americans that are seriously delinquent jumped more than 450%.

Homeowners younger than 50 have a higher rate of serious delinquency than their older counterparts. But the rate is increasing at a faster pace for older Americans than for younger ones, according to AARP’s analysis of more than 17 million mortgages.

Americans 50 or older are hard-pressed to recover from the collapse of the housing market that started in 2006 and was compounded by the recession that started in 2007. Eight in 10 own homes, but many live on fixed incomes, have little savings or have already burned through much of their retirement savings. They also have fewer working years left to build back what they may have lost.

And those who are forced to re-enter the workforce often find they can’t command the same salary they did in the past.

Older minorities are facing foreclosure rates almost double those faced by white borrowers of the same age, mirroring a nationwide trend seen in other age groups as well. Among older African Americans, 3.5% were in foreclosure at the end of 2011, and the rate was 3.9% for Hispanics. Just 1.9% of white homeowners were in foreclosure.

The issue has become so dire in Rep. Elijah Cummings’ Maryland district that he has assigned one of his 20 staffers to work full time to help struggling homeowners, and his office holds regular foreclosure prevention workshops. He said the federal government can do its part by promoting principal reduction and loan modification programs.

“These are people who in many instances have never missed a payment in 20 years,” Cummings, a Democrat, said in an interview. “You see grown men crying because of the potential loss of a home.”

Among older homeowners, those who are 75 or older are in the worst shape when it comes to foreclosures, the report says. In 2007, one of every 300 homeowners 75 or older was in foreclosure. Five years later, about one in 30 face that fate.

Many of those oldest homeowners may have lost income they were counting on, such as the retirement benefits of a deceased spouse. In the meantime, their mortgage payments have stayed the same.

The situation is likely to get worse before it gets better, AARP officials predict, because of a housing market that is recovering at a snail’s pace.

“This crisis is far from over,” Whitman said. “We need to think about more creative solutions now that we have this data.”