LOS ANGELES Banks are increasingly placing homes with unpaid mortgages on a countdown that could deliver a swell of new foreclosed properties to the housing market by early next year, potentially weighing further on home values. 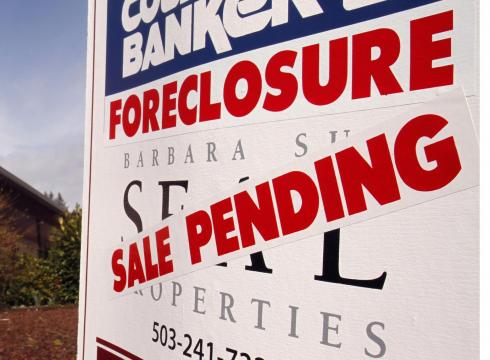 June provided the latest evidence of this trend, as the number of U.S. homes entering the foreclosure process for the first time increased on an annual basis for the second month in a row, foreclosure listing firm RealtyTrac said Thursday.

California in particular saw a big spike in foreclosure starts, or homes placed on the foreclosure path for the first time. They increased 18% vs. June last year, the firm said.

The increase in foreclosure starts comes as banks make up for time lost last year as the mortgage-lending industry grappled with allegations that it had processed foreclosures without verifying documents.

The nation’s biggest mortgage lenders reached a $25 billion settlement of that issue in February with state officials, which has cleared the way for banks to address their backlog of unpaid mortgages.

Lenders initiated foreclosure on 12% of the loans behind in payment in June the highest level since the first half of 2009, according to Fitch Ratings.

That means the latest crop of homes entering foreclosure does not signal that there is a fresh wave of homeowners in distress and missing payments.

Still, the increase in foreclosure starts sets the stage for a potential increase in homes sold at a discount via short sale, when the lender agrees to accept less than what is owed on the seller’s mortgage. Others could end up taken back by banks and placed on the market at a sharp discount.

Either way, short of homeowners obtaining loan modifications or otherwise arranging to exit the foreclosure process, many of these properties could end up adding to the inventory of foreclosed homes on the market, dragging down the values of nearby homes.

Those homes may not hit the market for many months, however.

In the second quarter, it took an average of 378 days for a home to complete the foreclosure process, or the point when a bank takes over the property, RealtyTrac said. That’s up from an average of 370 days the first three months of the year and a record going back to the first quarter of 2007, the firm said.

In New York, it took an average of 1,001 days for the foreclosure process to run its course in the second quarter, down from 1,056 days in the first quarter.

Of homes that entered the foreclosure process in June, those that end up as bank-owned properties would likely hit the market a year from now, Blomquist said.

“However, if they take the short sale route, it may be sooner,” he said.

Short sales take, on average, 319 days to sell from the time they enter foreclosure.

A stronger housing market could mitigate the impact of future foreclosures on home prices, and home sales are expected to end up ahead of last year. But many economists still say the market is years away from a full recovery.

There are some 3 million U.S. homes behind on their mortgages, according to the Mortgage Bankers Association.

An additional 629,000 homes were on banks’ books as of June, but not yet sold. That translates into a 15-month supply, at the current pace of sales, according to RealtyTrac.

And nearly 13 million home loans are underwater, or owing more than the house is worth. Those properties could be at higher risk for entering the foreclosure process.

Even so, the backlog in foreclosures that banks are still dealing with has slowed the pace of home repossessions.

RealtyTrac forecasts some 700,000 homes will be repossessed by lenders this year, down from about 1 million last year.

One thought on “More homes faced foreclosure risk in June”