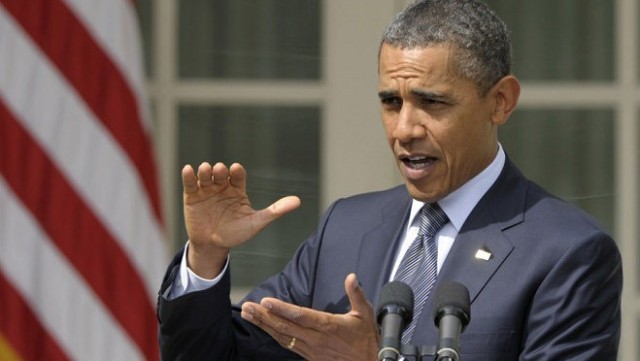 Much has been written over the last week about what President Obama calls a landmark foreclosure fraud settlement between 49 Attorneys General and the five largest banks. With the lone exception of the National Association of Consumer Advocates, champions for Middle Class consumers have roundly criticized the agreement as a sweetheart deal for the banks. In response, supporters of the settlement are quick to point out that it settles the narrow issue of robo-signing.

What is robo-signing? After all, it doesnt sound as bad as fraud and corruption.

Robo-signing and its sibling, surrogate signing, is the systematic, intentional misrepresentation or fabrication of evidence in every court of every county in every state of the United States. It is the filing of forged documents critical to a banks case in nearly every foreclosure in our country. Its bad enough that the banks are perpetrating fraud, but whats worse is that their lawyers are knowing accomplices to the fraud.

Lawyers are commonly referred to as Officers of the Court. Thats because lawyers take an oath upon admission to the profession to uphold the law and the integrity of the judicial process. We are the gatekeepers of justice. When we lie to judges, the integrity of our judicial system suffers irreparable harm.

Here is but one example of the criminal conduct that is being forgiven by the AG settlement:

In Florida, only the owner of the mortgage note and mortgage can file a foreclosure against a homeowner. Usually, the plaintiff in a foreclosure case is someone other than the originator of the loan because the original note holder usually sells the loan. The document evidencing that transfer of ownership is known as the Assignment of Mortgage, which is recorded in the official records of the county where the home is located. The Assignment of Mortgage is a critical piece of evidence in a foreclosure because it establishes the plaintiffs standing to foreclose. 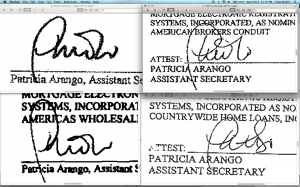 Here is a screenshot of four signatures of one Assistant Secretary of Mortgage Electronic Registration Systems as nominee for various mortgage originators. Clearly, all four signatures do not look alike, even though this is allegedly the signature of the same person. But this person isnt just a person shes a lawyer. And shes not just any lawyer. Shes the litigation managing attorney at The Law Offices of Marshall C. Watson, P.A., one of the largest foreclosure law firms in the State of Florida, and I spoke with her just two days ago!

The fraud being perpetrated goes like this: The plaintiff needs the Assignment of Mortgage from the originator of the loan to the plaintiff to create standing. So, the plaintiffs own lawyer creates the assignment, allegedly transferring an interest in land, and signs it herself. The lawyer then actually records this fabricated document in the county official records and also files it in the actual foreclosure case.

As the litigation managing attorney for Marshall Watson, this lawyer appears regularly before judges throughout the state, and these judges rely upon her honesty in all her dealings with the court. When a lawyer lies in court, it is worse than when a non-lawyer lies because we are not just sworn to tell the truth but to uphold the integrity of the court.

But what about a chief judge who is in cahoots with this foreclosure firm? Well, one of Marshall Watsons newer lawyers is the former Chief Judge of Broward County, Victor Tobin, who, just before joining the firm, designed Browards notorious Rocket Docket foreclosure court that radically tilts the judicial process in Marshall Watsons favor.

Someone really should tell Florida Attorney General Pam Bondi about this lawyer. Oh wait. She already knows. Floridas Attorney General has had an ongoing investigation of Marshall Watson for years. The investigation was started by Bondis predecessor, Bill McCollum, but the moment she took office, she was more focused on shutting down such investigations, starting with her firing of the bulldog attorneys assigned to foreclosure fraud. In Marshall Watsons case, they settled for $2M, but nobody was prosecuted for any crimes.

Well, at least Floridians have our elected state representatives to protect homeowner rights in the wake of this massive fraud. Dont look now, but a new Florida House of Representatives Bill HB213 is an expedited foreclosure bill that actually MAKES FRAUD EASIER for the banks by accelerating the foreclosure process. This bill has already made it out of committee with a 12 4 passing vote. Stay tuned for more on this selling out by our elected legislators.

If you are a homeowner, who is on your side? The President of the United States? The United States Congress? Your Attorney General? Your State Legislator? Your local Bar?

Its getting harder to tell, but the signs arent good.