Typical U.S. family got poorer during the past 10 years

A typical U.S. family got poorer during the past 10 years in the first decade-long income decline in at least a half-century, new federal data show. 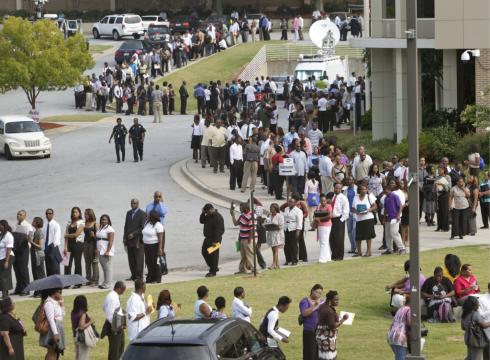 Median household income fell 2.3% to $49,445 last year and has dropped 7% since 2000 after adjusting for inflation, the Census Bureau said Tuesday. Income was the lowest since 1996.

Poverty rose, too. The share of people living in poverty hit 15.1%, the highest level since 1993, and 2.6 million more people moved into poverty, the most since Census began keeping track in 1959.

Standard of living may have declined less than income because the Census doesn’t count most anti-poverty programs food stamps, medical care, earned income tax credit as income, he says.

The poor, the young and minorities had the biggest income drops last year. Median income for black households fell 3.2% to $32,068, while non-Hispanic white income fell 1.3% to $54,620, a decline that wasn’t statistically significant.

“It’s all about joblessness,” says Timothy Smeeding, director of the Institute for the Research of Poverty at the University of Wisconsin. “Young guys don’t have work, and poverty would be even higher if so many 25- to 34-year-olds weren’t living at home with their parents.”

Hard times are forcing people to “double up” live with their parents or other family members, says Trudi Renwick, the Census Bureau’s chief of poverty statistics. The number of households doubling up grew from 19.7 million in 2007 to 21.8 million in spring 2011, Renwick says.

Car salesman Tim Ticknor of Reno suffered an income drop from nearly $100,000 during boom years to $30,000 last year and even further this year when his dealership went bankrupt. His family has moved in with his mother-in-law. “Just surviving is difficult,” he says.

¢Health insurance. The share of Americans without coverage rose to 16.3% in 2010 from 13.1% in 2000. Government is insuring more people; employers are insuring fewer.

¢Seniors. People 65 and older were the only group to prosper during the decade. Household income rose 7.5% adjusted for inflation over the decade, helped by Social Security.